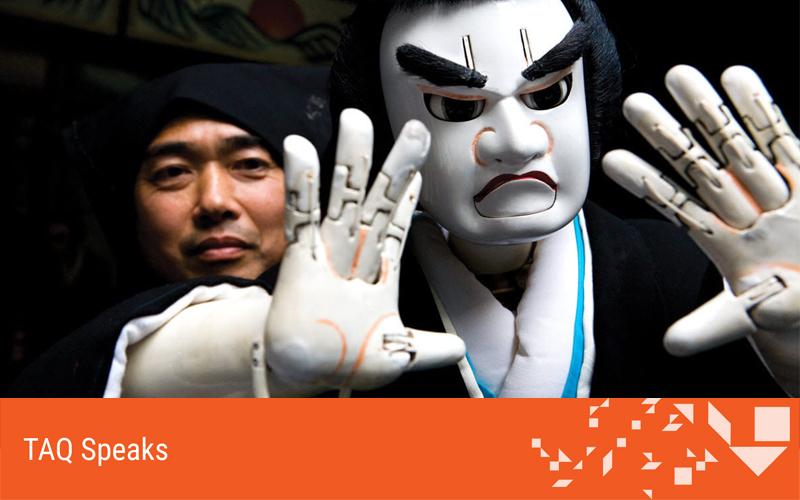 More and more, people are finding themselves on teams of people who are in different geographic locations or show cultural differences. Working on diverse teams, or in groups with people who have varying opinions requires strong collaboration abilities. The ability to have excellent teamwork might include the ability to communicate effectively, share resources, and information seamlessly, enable others, and sometimes, even have an understanding of different cultures. For employees, already over-burdened with the rigour of their roles, this added complexity is demanding.

Based on the different art forms we use in our leadership programs at The Arts Quotient, we realized that this new way of working could be made much easier by approaching it like Japanese Bunraku puppeteers. These puppeteers work with life-size puppets that take at least three people to manipulate. Each puppeteer has a specific limb or body part to manoeuvre and the team has to work in perfect harmony, without any verbal conversation.

You would think this is tough, but the troupe moves beautifully together, convincing their audiences that the inanimate puppet is a living, breathing creature with feelings and stories. When pitching in as a team player, here are some lessons young professionals can learn from these master puppeteers.

Focus is vital. Master puppeteers know that if a single member’s attention wanders, even for a moment, the entire performance fails. They train to keep their eyes focused on the puppet and remain alert at all times, even if they do not have a role to play in a particular gesture. When working in teams, be fully attentive to the project. Assume collective responsibility for the outcome, even if you are only playing a small part on that project. The team leader may set the direction and the pace of work, but the alignment and flow comes when every member remains focused throughout the process.

Keep your eye on the big picture. If novice puppeteers get totally absorbed with their individual part in the puppet’s movement, they could lose awareness of what is going on with the broader troupe. As each manipulates a different limb, the right hand of the puppet may not align with what the left is doing, making the performance appear disjointed to the viewer. Puppeteers train to balance between their own individual task and the overall performance. While it’s critical to remain immersed in one’s own role, a great team player is still tuned into the entire project, not losing sight of the bigger picture.

Listen to the words unspoken. A smooth puppetry performance can only happen when there is constant communication between members of the troupe. But, they have to do this without words! Puppeteers know that communication is not merely about sharing or talking. In fact, it is fundamentally about tuning what is both said and not said. They remain fully tuned into the body language and energy of their fellow puppeteers so they can pick up cues of what will happen next. When working in teams, listening is about tuning into both the content of the conversations as well as how people feel about what’s being discussed. This awareness is the key to recognizing where the group is going and knowing how to step into sync with the process. At work, such listening can give us clues of how we can support the team.

Be agile, be flexible. In live performance, things can be unpredictable. Collaborators can forget their parts and many other unplanned stage glitches can occur. Puppeteers understand that excellent performances are not just about doing their own parts perfectly as planned. If a troupe member forgets a sequence and changes a move, doing your role as planned will only make the whole puppet seem out of sync. Performers embrace flexibility, changing how they contribute, depending on how things unfold in real time. At work, be willing to let your point of view change as your project changes. Go with the flow and stay open to new ways of doing things. The life breath of a puppet and any other team project lies in the ability of group members to understand the balance between the bigger picture and their own individual roles. While the performance and contribution of each team member is to be celebrated, the synergy that emerges when all these individuals are in sync is what makes for excellent teamwork and a truly rich experience! Now that you’ve learned how to be a master puppeteer and be excellent at teamwork, find out how jugglers manage multitasking.

This article was first published on HBR Ascend.

How to Shine in the (Virtual) Spotlight

How to Master the Art of Continuous Learning

Matters of the Art